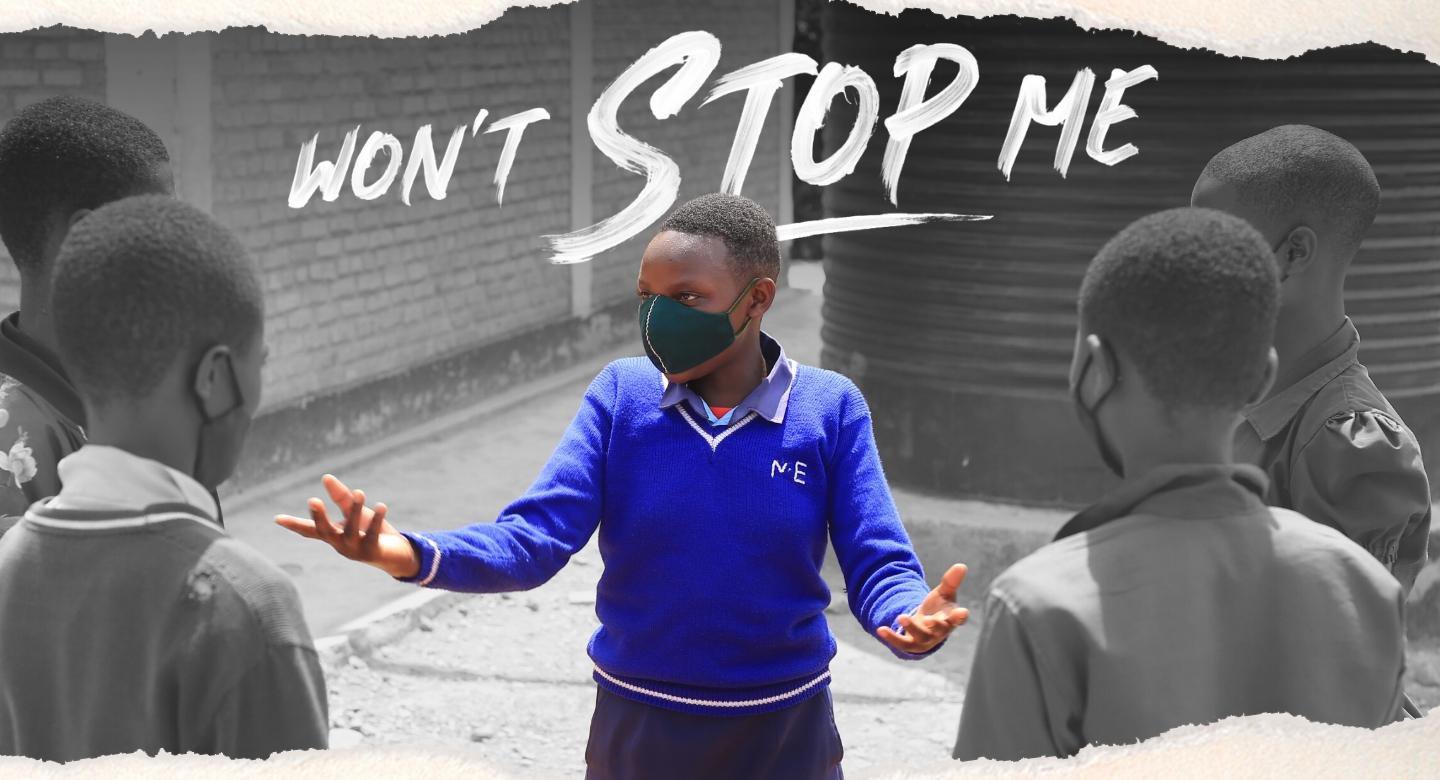 In rural Rwanda, a group of students gather in a circle on the dusty ground of their schoolyard, eager to take a break from lessons to play volleyball, their favourite game. Emelyne, 12, picks up the ball and hits a well-aimed shot to the boy across from her. This is the best part of Emelyne’s day. There are roars of laughter and excited shouts as the children bat the ball from person to person. When the teacher calls on them to return to the classroom, they’re energized and ready to focus on their afternoon lessons.

But this kind of play hasn’t always been part of Emelyne’s day. Not that long ago, she struggled with self-confidence, and hesitated to join sports and activities because it defied social expectations about what's appropriate for girls. On top of that, challenges at home made it hard for her to focus on her studies and she struggled with basic literacy skills. But with the support of her peers in Right To Play’s school leadership club, Emelyne has not only started playing and learning, but she’s also using her voice to advocate for equality in her community.

Only 68% of Rwandan children who enroll in first grade complete all six years of primary education. And only an estimated 71% of these students continue their education in lower secondary school. For many families, the cost of school uniforms and educational materials are simply unaffordable. Gender inequality also contributes to lowering graduation rates – and expectations – for girls.

The teachers who lead Right To Play’s leadership clubs are very familiar with the challenges girls face. They work hard to support children to overcome the obstacles they face in accessing education and opportunities, help them build up their confidence, and create opportunities for both boys and girls to lead and succeed.

“Before joining the club, I did not know how to read, write, or draw. I could not stand in front of my fellow students and talk to them or be involved in creative games." – Emelyne

Emelyne joined her school’s leadership club in 2018. Vincent, her teacher, says she was shy at first, but loved playing games with her peers during weekly sessions. As he got to know her better, he started to notice the days of school she missed, and how she struggled with basic reading comprehension and writing skills.

One day, Emelyne came to see Vincent and explained that her family was having financial challenges and couldn’t afford her school materials. She had been struggling for some time to keep up with her studies, but it had become too hard, and she told Vincent she was going to drop out. Vincent could tell she wasn’t happy about it. He offered to speak to her father see if there was any support he and the club could offer. 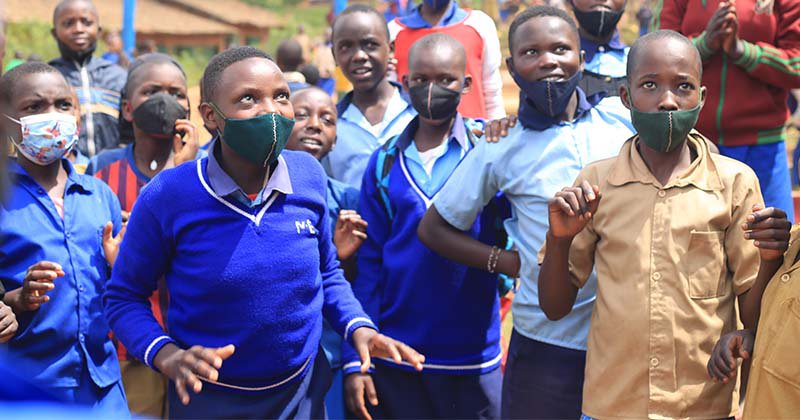 Emelyne plays volleyball with fellow students during breaks between lessons.

When Vincent met with Emelyne’s father, Didas, he said he had received reports from Emelyne’s other teachers that she was inattentive in class and had not been performing well, so he had encouraged her to drop out. Vincent offered to support the cost of purchasing school supplies for Emelyne. With her financial stress gone, he hoped that she would be better able to focus on her studies. Didas accepted the offer and agreed to support Emelyne to continue to go to school.

The club also gave Emelyne a way to fund future school expenses. “We gave Emelyne a rabbit, which produced more rabbits that she was able to sell. Eventually, she sold enough that she could buy a pig, which she could sell to help her continue covering her educational costs,” explains Vincent.

With the right school supplies and the support of the club, Emelyne’s performance in school began to improve. Soon, she was at the top of her class.

“I benefit from the games we play. Because every time I play, I can refresh my mind and that increases my academic performance.”  – Emelyne, 12

“Her transformation is really significant,” says Didas. “She started performing well at school and became more confident. Before, she could be asked a simple question and would struggle to produce an answer. But after joining the club, she plays with others and speaks her mind where she would not before. This warms my heart. I strongly believe that if she keeps this up, her future will be bright.” 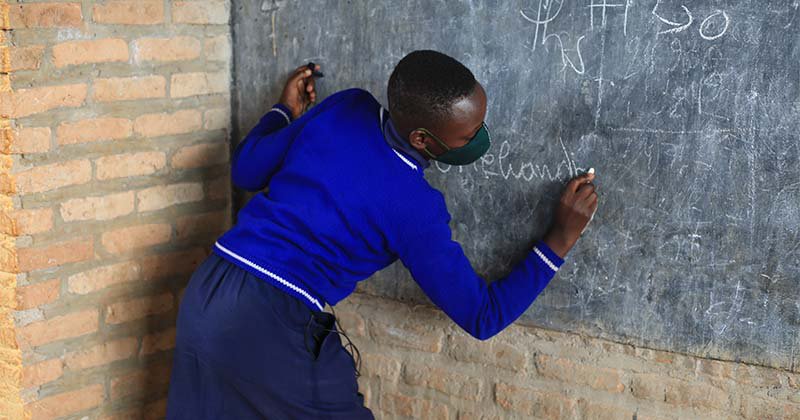 Emelyne writes an answer on the chalk board in front of her peers, a task she would have found intimidating before participating in the leadership club.

CREATIVITY FOR THE FUTURE

Not only has the leadership club supported her to stay in school, it has also encouraged Emelyne to tap into her creativity. Each week in the club, students present stories and songs they've written, or share drawings and other creations. Emelyne used to be too nervous to even try to speak up. But seeing her friends showcase their talents inspired her to tap into her own creativity.

“When I saw others presenting what they had written, it encouraged me to write too. So I wrote a poem about gender equality between girls and boys," she says. Her poem, Gender Equality in Rwanda, won first place in a school competition.

Emelyne knows now that women and girls can accomplish anything they put their mind to. She plans to continue advocating for gender equality by one day becoming the mayor of her village.

“Before joining the club, I did not know how to read, write, or draw. I could not stand in front of my fellow students and talk to them or be involved in creative games. But now that I am in the club, nothing is impossible for me,” she says.

“The students used to think that girls could not do some activities because of social views on gender roles. But the leadership club helped them realize that all activities can be done with boys and girls.” – Vincent, Emelyne’s teacher 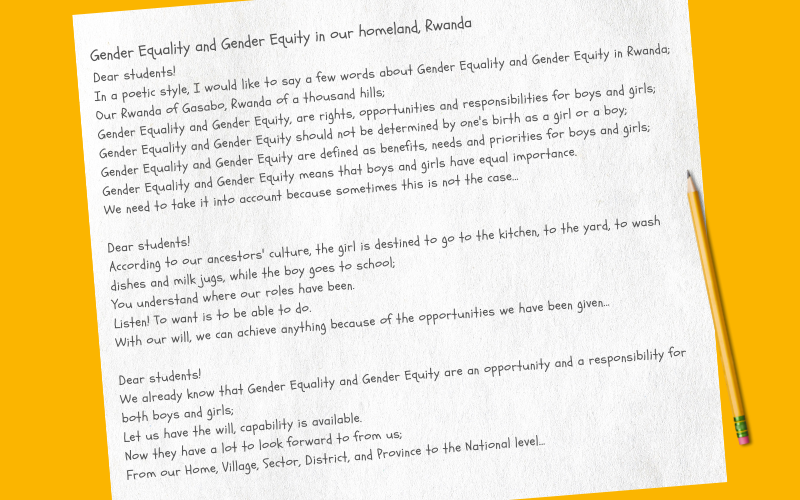 A translated excerpt of Emelyne's poem about gender equality. Her poem won first place at a school competition.

The leadership club that Emelyne and her friends attend is part of the Gender Responsive Education and Transformation (GREAT) program, which is made possible thanks to the financial support of the Government of Canada provided through Global Affairs Canada. Active in Ghana, Mozambique and Rwanda since 2018, the GREAT program uses Right To Play's play-based learning approach to remove barriers to education, especially for girls, and to build teacher capacity to improve learning outcomes.