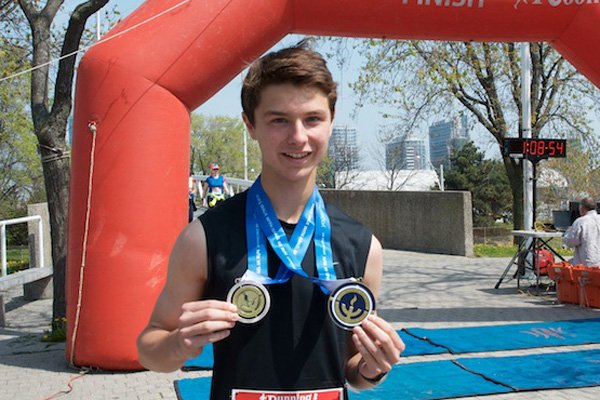 Evan’s trying to set the Guinness World Record for running a half-marathon in full hockey gear this Sunday.

This Sunday, October 21, runners will be testing their limits by running to raise funds and awareness for Right To Play at the Scotiabank Toronto Waterfront Marathon. Congratulations to everyone who have been training to run, fundraising and spreading the word, and supporting the runners. Individual participants have already raised $18,000 for Right To Play, and they’re racing for a final goal of $25,000 raised. Don’t forget to donate in support of them! Already made your gift? Don’t forget to show up on Sunday to cheer all our great runners on!

“Together, we can help kids around the world who want a better life for themselves.” – Evan, participant

We’d like to give a big shout-out to Evan, a Queen’s Engineering student, our top individual fundraiser and hopefully soon to be a world record holder. Evan will be running a half marathon, all 21.1 km, in full hockey gear, complete with stick (luckily, he doesn’t have to do it in skates), to set the Guinness World Record.

“I’m pushing my limits to inspire other people to get involved with Right To Play,” Evan says. He first heard of Right To Play in high school, when a friend did a project on the charity. He knows the life-transforming power of play himself, and credits his discipline and dedication to lessons he learnt from a life-long involvement in sports, including skiing, running and karate.

But Evan’s not doing it alone. He’s one of nearly a hundred people who will be testing their limits for Right To Play on Sunday. We’re so grateful for such a huge show of support from the community. Even if you haven’t signed up for the marathon, remember to come down and cheer! And remember, it’s not too late to make a gift in support of any of the runners!