Getting in the Game: Ahmad’s Story 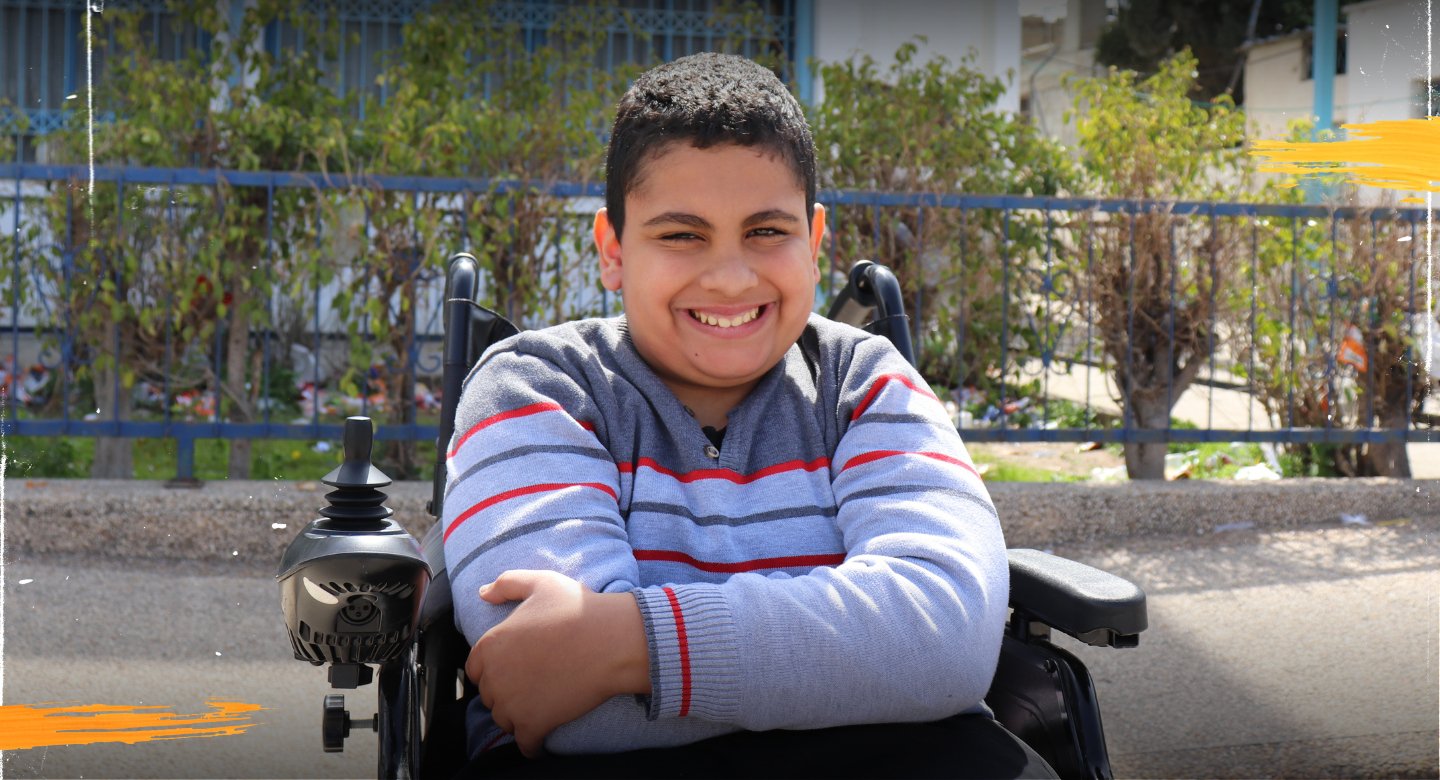 Children dash down a football field in a refugee camp in the West Bank, chasing a boy who is about to score a goal. As the ball goes past the goalkeeper and into the net, Ahmad leans forward in his wheelchair to blow his whistle and signal the point. He waves the other children back into a face-off, sets up the ball, and blows his whistle for the game to start up again.

The game is one of the activities in Ahmad’s physical education (PE) class, but he has not always been able to freely participate in the games. Before his teacher learned how to integrate inclusive activities into their PE class, Ahmad would often sit on the sidelines and watch other children play, or go home because he felt so isolated and discouraged. Now, he is challenging expectations and shifting mindsets about how he can get involved in the games they play.

Ahmad used to feel isolated because of his disability. He would separate himself from other children when they went outside to play.

Growing Up Feeling Isolated and Ignored

When Ahmad was a baby, he survived birth asphyxia, a condition that occurs when a baby’s brain and other organs don’t get enough blood or oxygen at birth. The condition left Ahmad with long-term physical impacts, including needing to use a wheelchair for mobility. Growing up with a disability made it difficult for Ahmad to fully participate in play like his peers, and left him feeling isolated.

Those feelings of isolation were most acute during physical education classes at school, where he was forced to sit on the sidelines and watch the other children run and play. His school was physically accessible, but his teachers weren’t sure how to make their activities more inclusive so that he could participate. Ahmad’s teacher, Mohammad, was reluctant to let him participate in PE class because he was afraid that Ahmad might get injured, or that his wheelchair might get damaged.

“Whenever there was a physical education class, I used to go home. I’d have nothing to do, so I didn’t want to stay.” - Ahmad, 13

Even outside of class, Ahmad kept to himself. He felt self-conscious about using a wheelchair and would keep away from other children. When his peers would go outside for recess, he would stay inside, fearing he would just slow them down and spoil the fun.

His mother, Khawla, tried to talk to him about how he was feeling, but he shut her out. “Ahmad did not ask for help from anyone, and he would get offended if someone tried to assist him. He was self-conscious of his condition and did not accept it. Whenever I asked him about his day, he wouldn’t share anything with me. He would just bottle up his feelings." 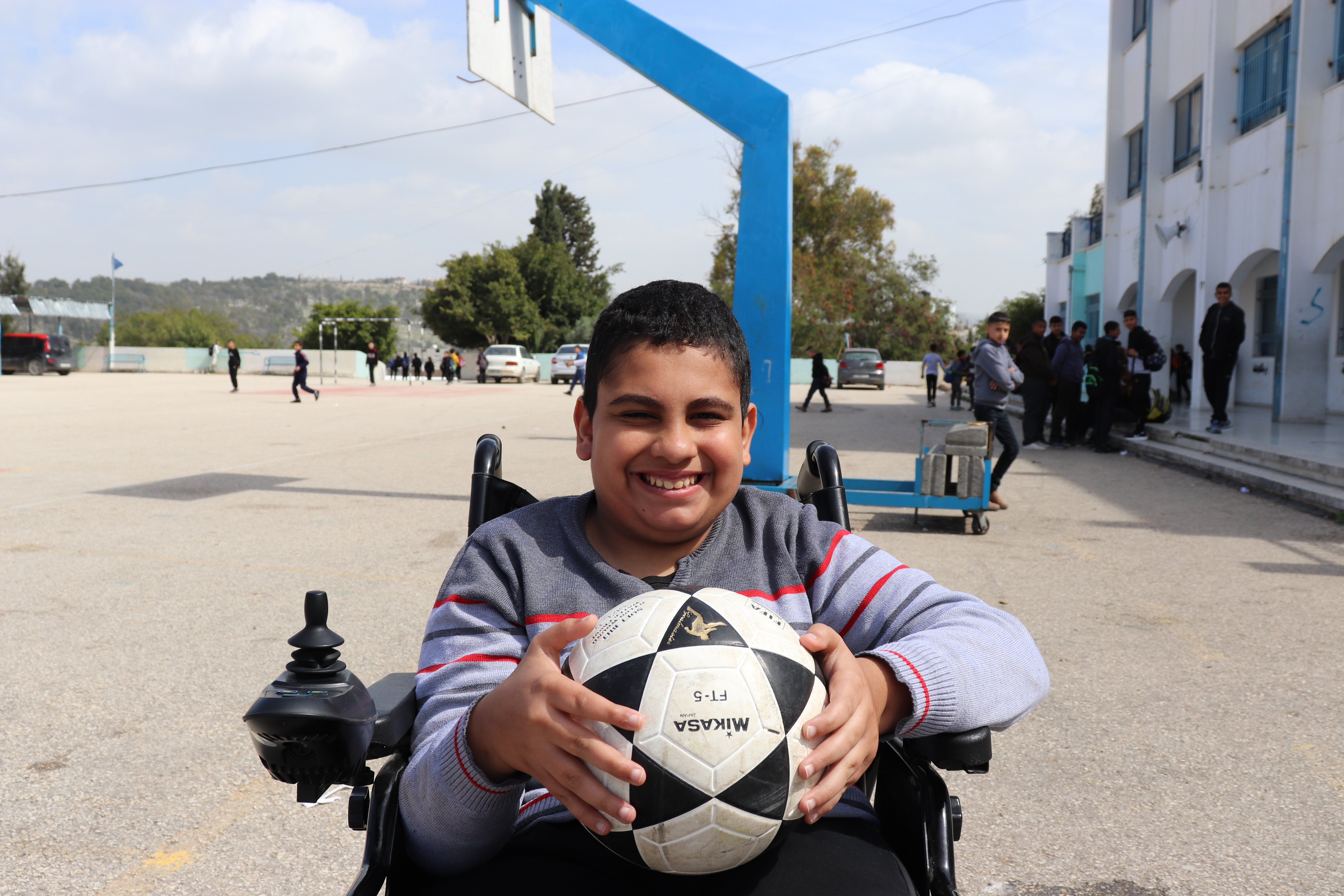 Ahmad loves being a referee because it allows him to participate in his favourite sports and earn the respect of his peers.

Right To Play’s TOGETHER project supports schools to create inclusive learning environments where all children can thrive. Through specialized professional development sessions, teachers receive training on how to respond to common inclusion challenges, how to adapt games and activities to reduce barriers to participation, and on the importance of including all children, regardless of ability.

“Ahmad has changed now. He is excited about trying new things and is always curious to learn more.” - Khawla, Ahmad’s mother

After he attended trainings, Mohammad started integrating his learnings into his lessons. Now, he’s more thoughtful about how he can adapt the activities to ensure Ahmad can participate too. For example, instead of using a full-size net during basketball exercises, he encourages the children, including Ahmad, to take turns holding up a hula hoop that they practice shooting at. He also coaches Ahmad’s classmates to be more considerate of his needs, creating a system of peer-to-peer support that has helped Ahmad build stronger connections with the other children. In time, Ahmad started feeling more confident and began to socialize with his classmates without feeling awkward or uncomfortable.

“I could notice the change in him immediately,” Mohammad said. “He felt like a leader.”

Ahmad’s mother noticed the change in him too. “Ahmad has changed now. He is excited about trying new things and is always curious to learn more.”

From Sitting on the Sidelines to Leading the Game

As Mohammad noticed the positive changes in Ahmad, he started looking for even more ways for him to participate, including inviting Ahmad to referee the class’s regular football game.

Acting as the referee was Ahmad’s proudest moment. Instead of feeling anxiety, he felt empowered – a full member of the team. Ahmad has now started to help other children with disabilities in his school to understand their capabilities and accept themselves as they are. He hopes to change the way that children with disabilities are perceived and make his community more inclusive. He's also been inspired with a new idea of what he wants to do when he grows up.

“I want to become a PE teacher in the future, so I can teach the other children what I learned.” - Ahmad, 13

Stay connected to kids in the Palestinian Territories

The training that Ahmad’s teachers went through is an initiative of the TOGETHER project, funded by the Government of Canada through Global Affairs Canada. The project aims to remove barriers to education for refugee children, especially girls, and to build teacher capacity to create safe, supportive learning environments for children. Through play, children develop important life skills that support conflict resolution, social cohesion, and psychosocial well-being in their daily life and in school settings.